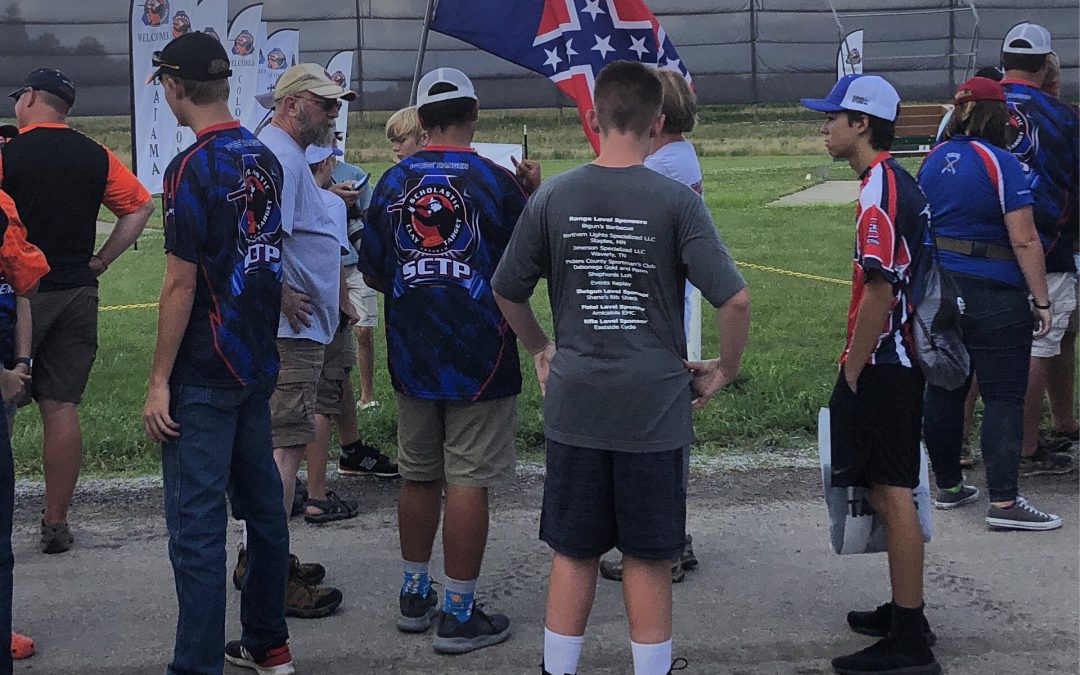 We want to thank each and every person, business, sponsor, etc for all the support we received during our first season.  Each one of you made it possible for all these kids to have a fun year.  Please enjoy the article with our season recap and thank you again for your support!

A group of 19 kids from Ellijay, Jasper, and Canton came together in the last ten months to accomplish some extremely noteworthy achievements.  The team started out as four kids one September weekend, having never competed at any level with any firearms.  For some this was the first time they had even picked up or shot a gun of any type.  As the team grew through word of mouth and they practiced each month, it was evident they were really retaining the fundamentals being taught and continually bettering their scores.

The team was invited to attend the Alabama State Match held 29 – 30 June near Birmingham.  Eight of our athletes committed to attend that match, which was also attended by more experienced teams from Alabama and Tennessee. This was our second state level match of the season and the final tune-up before heading to the National Championships.

Finally we wrapped up the 10 month journey with a trip to the SASP National Championships held at the Cardinal Shooting Center in Marengo, Ohio from 13 – 20 July.    Against all odds and reasonable expectations the team took 14 athletes to Nationals with five of them representing Georgia on the All-State Team: Rachel Ballew in Pistol Caliber Carbine, Noah West in Rimfire Pistol, Harley Barthelmess in Rimfire Pistol and Rifle, Jack Poulos in Centerfire Pistol and Rifle, and William Grubb in Centerfire Pistol.

We cautioned them to not expect  much, to not even expect to place let alone medal. There were 65 teams from 20 states on hand for the largest action shooting match in history with us being one of the newest teams. The team went out and did their best, most of them turning in their best times of the season and in the end it all paid off.

A squad of four middle schoolers, 7th and 8th graders, Kristopher Ballew, Zachary Dutton, Aidan Seargeant, and Breton Seargeant maintained their composure despite the 115 degree heat index and completed the competition solidly. They brought home a third place finish in the Intermediate Division 1911 discipline. Rachel, 10th grader, also remained strong and earned an individual 2nd place in the Senior/Junior Varsity Female division for centerfire pistol.  Aidan Seargeant was also recognized at Nationals for making the Scholastic Shooting Sports Foundation All Scholastic Team by shooting under 75  seconds in rifle and maintaining at least a 3.0 GPA.

During our second season our focus will be on getting a full set of the appropriate steel needed to set up all seven stages. While only 4 stages are used in a match there are seven different configurations that we need to be proficient at.  At this time we are only able to set up 4 of the stages and we are very limited in our ability to adapt to the alternate stages.

If you would like to sponsor our team for this next season or donate to our steel campaign please see our website www.mountaintownmarksmen.com

Thanks again to all of our sponsors with whom we would not have been able to accomplish everything we did in our first season!

Register to get the news first. Sponsorships, raffles, and team updates.

You have Successfully Subscribed!